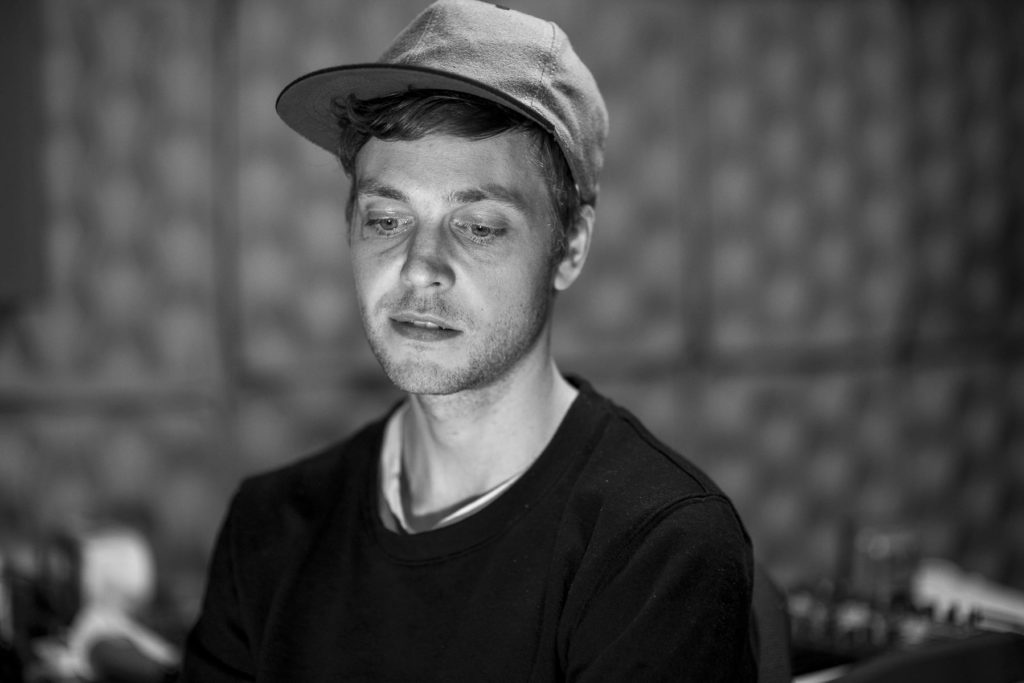 Sindri Már Sigfússon is a musician, artist and skater who’s been around the block afew times. He’ss also known as Sin Fang, and is tied to Seabear as well. We met him at his west side studio and discussed his music career and what lies ahead for him. And talked about skateboarding as well and what it was like to work with Alien Workshop.

When did your music career start?

The first Seabear album kind of ruined my artistic career, which is alright, because I had found out that I got more out of music. I´d get goose bumps much more easily from going to some punk concert than attending an art exhibition. I was perhaps thinking about studying teaching and becoming an arts teacher, and just being comfortable, but music just kinda took over. Attending the LHÍ visual arts department was really nice, because there was so much freedom there. Before I started there I had been working all kinds of bullshit jobs from eight to five and being rather fucked up when I got home, which means you don’t have much energy to do anything else. But I was usually finished by noon at LHÍ, so I really had all day to make music, which is when I made my first Ep.

Tell me a bit about yout first concert.

My first concert was at Volksbuhne in Berlin, which is a big old theater. The only reason I accepted that gig was that I was gonna open for another band called The Books, which is a New York band that is a lot of fun. Then after accepting, I realized I had never played a show before and had no idea what I was about to do. I got this girl in my class to play the violin and Örn Ingi, a skate buddy of mine, and the only guy i knew who could play the guitar. We started rehearsing some songs I had been working on and then, all of the sudden, we we’re playing some six hundred people theater, and I almost got an ulcer from the stress. Tomas Morr, the owner of Morr Music, was at that concert. He kinda offered me a contract right after that show, which I don’t understand, because I think it was a really bad show. But he probably saw some potential in us and we’ve worked together ever since. Since then two Seabear albums have been released, three Sin Fanf albums, and slew of Eps and 7 inches, spanning seven years really.  I first heard about Morr Music when I read that Tom York had bought Morr’s entire catalog. I was such a radiohad fan as a kid. And Múm was also being released by them, and I got to know the Morr crew personally through them. 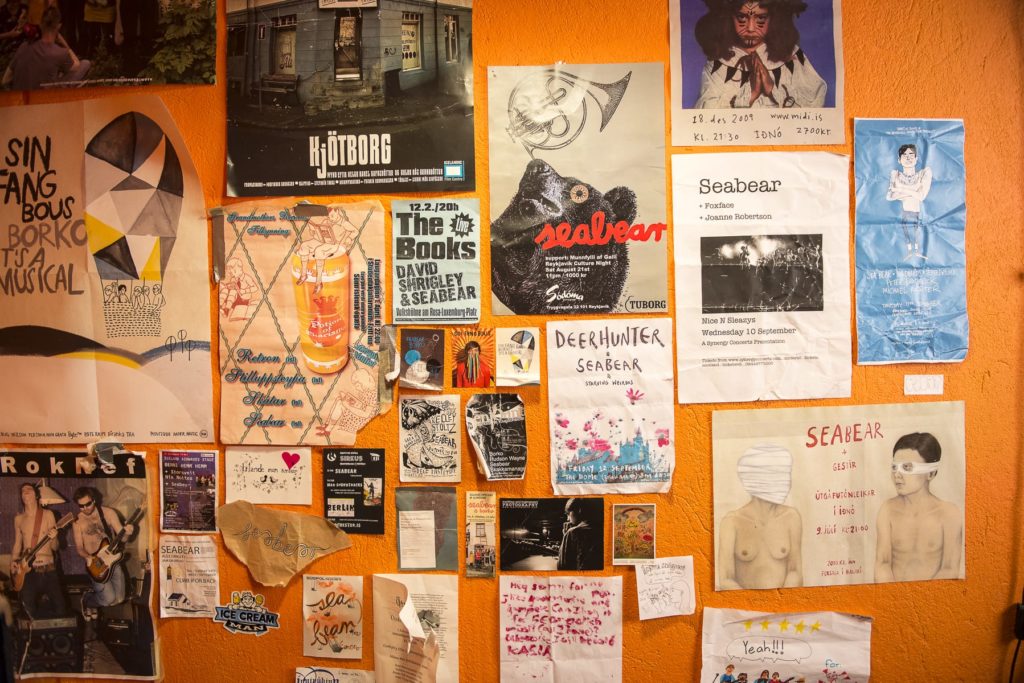 Is making an album hard?

Yeah, sometimes making an album is really hard. Not being able to finish a song, for example. But you always get there in the end. The latest record really was the easiest one to make.. I made that album with Alex Sommers, who was the producer, but he recorded everything and mixed it as well. When you’re recording everything yourself, composing and mixing, you’re really doing three jobs at once. And it can get really hard when you’ve heard the same song a thousand times and maybe have gotten fed up with it. Then it’s hard to know what you’re supposed to do, so I think that record was the easiest one to make.  If I had unlimited money I’d just hire  some good recording guys, because I’m not such a great recording guy. It’s always helped me to have a deadline from the label and get an upfront payment to make the album. Then you’ve have to finish it. I think a lot of people struggle with completing the songs, maybe they keep starting something new. I always want to start something new. Sometimes you’re really fed up with what you’re doing, but you’ve gotta finish the songs and follow through.

You’re working on an album at the moment. Tell us a bit about that. Do you have some kind of plan around it?

I´m making an electro album at the moment. I’ve been more into the synthesizer and sample mood for the last year, after I made the the other album; Flowers. I haven’t really touched the guitar this year. You’ve got to make it exciting for yourself to be able to keep going, because if working on making music isn’t fun, then you should just get another job that you might actually get paid for. The album I´m making at the moment is kind of a duet album. I’m getting a voaclist to sing with me on each song, Jónsi from Sigur Rós on one song, for example. There’s not a lot of real instruments, but a lot of effects and voices. I always find it hard to do the bass for electro music, which is why I  like taking it to a large studio and the right room. Then you can tweak it as you like. The difference between using analog bass instead of a soft synthesizer is immediately noticeable and recording through some pre-amp.

Do you listen to a lot of music on a daily basis?

I’ve always got my phone and earphones. My day always starts with me listening to something and answering e-mails. I’ve mainly been listening to rap and R n’ B for the last few years.. Kanye West and Weekend, for example. I always find drug rap really entertaining. They’re always talking about some pills and glue. I don’t know if I’m having a midlife crises or something, but I mainly just listen to that kinda music. I think the new  Kanye West’s seen the heaviest rotation in the last year. It’s pure genius. Then I’ve also been listening to to elctro, but not a lot of guitar music,  you know, regular music. 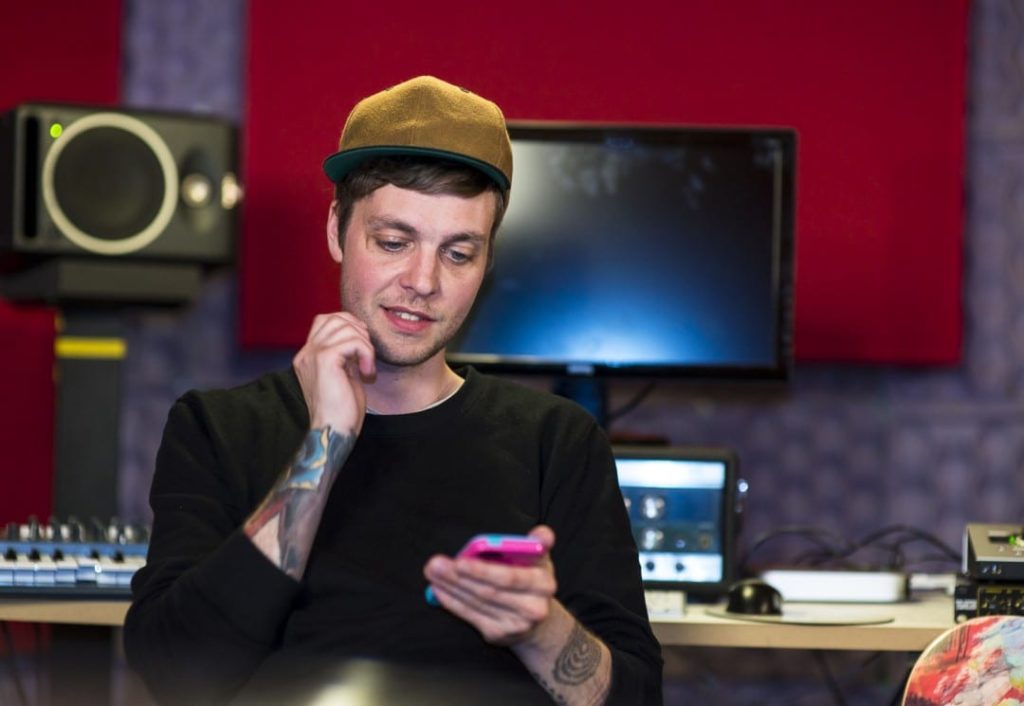 You’re a skater as well. Are you still skating a lot, and how did you first get interested in it?

I lived in Sweden when I started skating. My parents didn’t wanna give me a board until I was seven. This was back when the boards just had a tail and no nose, and i got one of those. There were mini ramps in my neighborhood, and that was probably the reason I got interested in skating, just from watching the the other guys skating. So we just started skating ramps. There’d been a small spot constructed nearby with a few ramps, so we’d take the bus there, and yeah, I was just smitten with skateboarding culture. When I got back home I just kept skating and I got hold of some skate videos, one of which was Ban This from Powell Peralta, which I found at Kolaportið, and it was dubbed in Spanish. It was also really good for me me socially. I don’t think I’d survived Hagaskóli if I hadn’t been skating. You could identify with the skate group no matter ho weird you were. I lived right by Ingólfstorg, and I probably spent more time there than at home. But I think I stopped skating when I was like eighteen, after I’d disloctaed my elbow for the third time and tore the synovial really badly. I remember skating in Seltjarnarnes  on some rail, and  I fell and broke the fall with my hands, and “pop”, dislocated again. It was always a real process after this. Morphine, in a plaster, and I couldn’t really move my hand after the plaster, physical therapy, and just a whole lot of hassle. So I´m not skating as much as I used to, but these days I mainly go skating by the Harpa, where there’s a ledge I really like. Sometimes we´ll just go skate, chill, and sip some beers. A few of us sometimes get together, go skating, and then watch the Street League competition when it’s on. It’s the most entertaining competition I’ve seen. I skated continuously from gage seven and all the way to when i was eighteen, but I never really got any good at it, which is fine in the skateboarding world.

Who is your favorite skater?

My favorite skater was always Jamie Thomas, after I saw him in Welcome to Hell. And also Chad Muska at the time and Tom Penny. 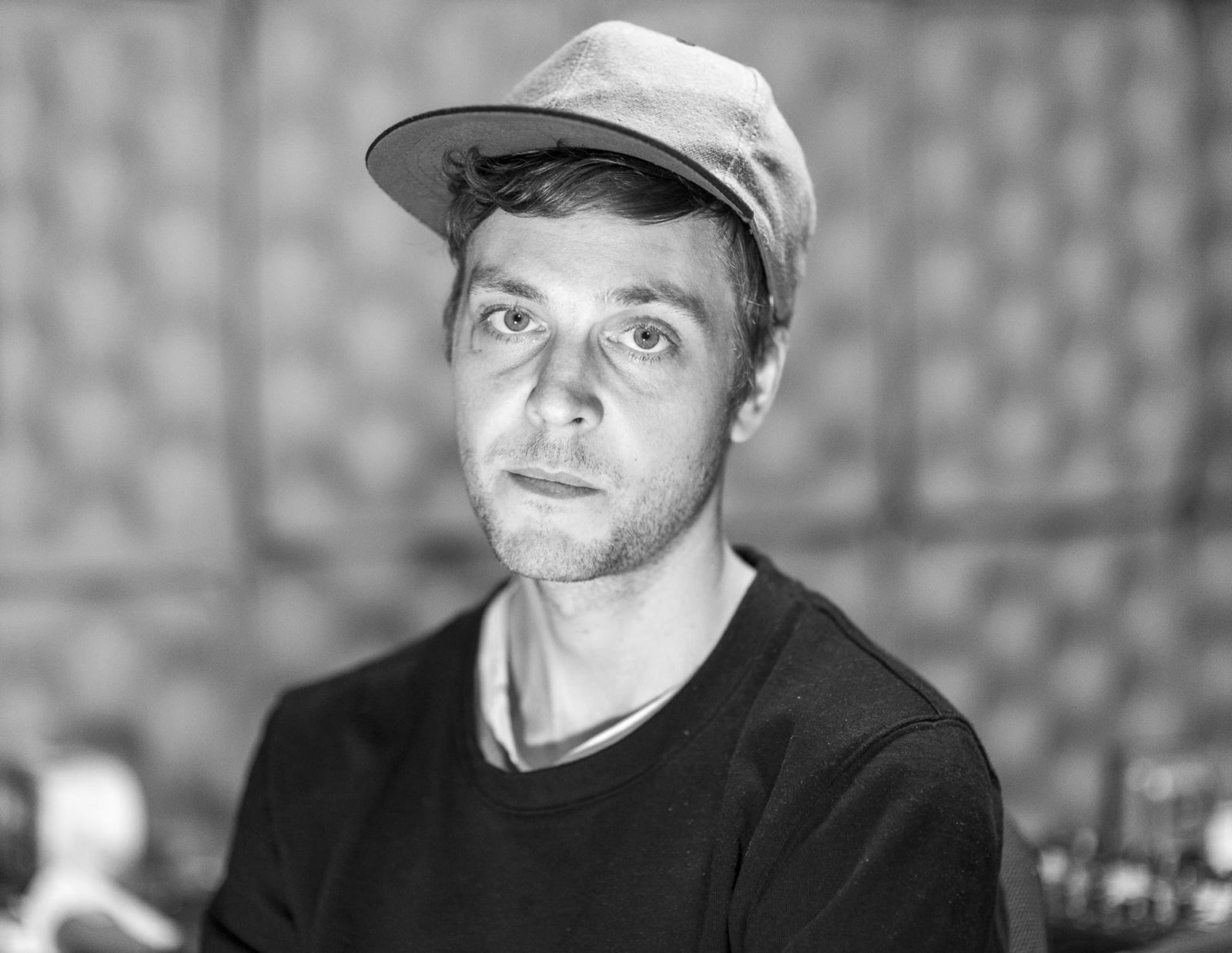 Do you feel like there’s a connection between music and skateboarding?

Yeah, music and skateboarding have always been brothers in arms. Everyone I know from skating has gone on to creative jobs, musicians, cinematicians or photographers. Most of these people took their first steps with something skate-related like skate videos or photographs. I feel a lot of connection between writing music from scratch and skating. They both have this DIY mentality and alternative way of thinking. So I feel like skating had a lot of a shaping effect on me, in viewing my environment in a different light, for example. All these company’s you were into, like Foundation, Toy Machine and these guys like Ed Templeton, who were doing their own graphics, and all the skate videos as well. Alien Workshop, for example, is a very visual company with very visual images..

You actually worked for the Alien Workshop company. How did that happen?

Yeah, that was a real drem come true. My first deck came out last year for Alien Workshop. Probably the worst skater ever to have a deck for a skate company, hehehe. The first board I ever had was actually an Alien Workshop deck that I bought from MC Gustó (a local skate legend). It was really crazy! My friend and I always have an arts exhibition during Airwaves, and Mike, who’s the owner of Alien Workshop, came there and asked if I would like to make the graphics for some dec. I was about to release an album in February, so I had the idea that we’d release the album with the skate deck. You could buy the deck and get a download code with the Sin Fang album, which is the most fun release I’ve done. It’s really surreal to be skating on a deck that’s branded with your own name. It’s a childhood dream. But, as I said, I´m probably the worst skater ever to have his name on a deck. I went to Slam City Skates in London and saw my board there, which was really insane. It was also fun that after this, Heiða the owner of Nikita, got in touch with me and I did the graphics for a couple of snowboards that came out last fall. So it’s really fun to get to connect with the skate and snowboarding scene. It was a real dream come true to get to work with Alien Workshop. 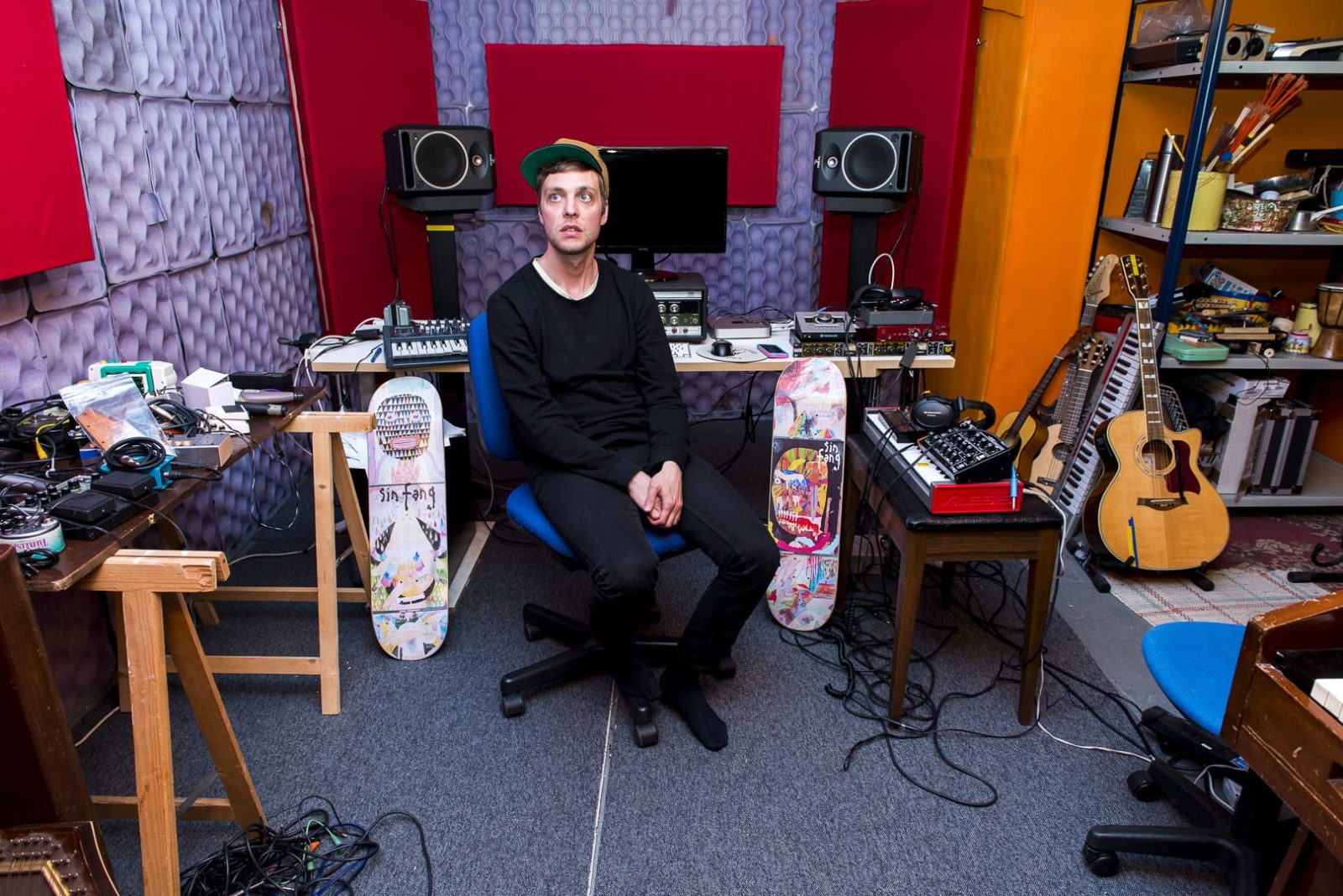 What’s the plan for Sin Fang in the near future?

The plan is to finish this Ep this year, but it’ll only be released on vinyl. Then I’m going to Turkey in November to play a Nordic festival, and then I´m going to Denver, Coloradi and Japan in February 2015, where I´ve never been before. Then I´m performing live during a Swedish Docmentary Award gala, which is weird. This is the plan at the moment, so a lot lies ahead.