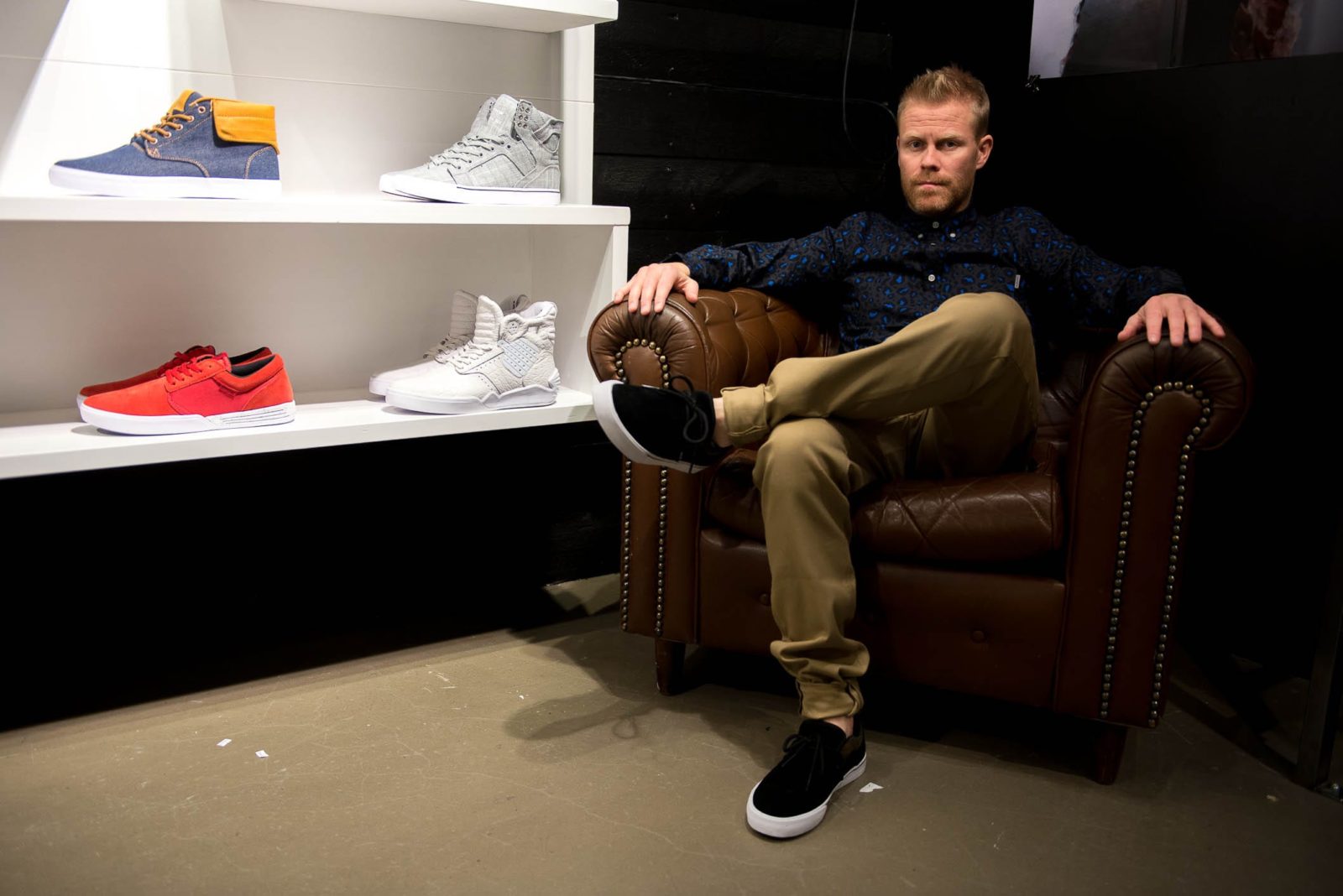 Siggi at Noland is one of the pioneers of the Icelandic snow- and skateboarding scene. He opened his first shop at the age of just twenty one. Since then he has pulled a McTwist on life.

You opened the Holan store in Akureyri. When was that?

I opened Holan in 1996 at the age of twenty one. This came about because I was skiing at mt. Hlíðarfjall and Jói and Jón Teitur from the Týndi Hlekkurinn board store were there snowboarding, looking all cool dressed in Sessions clothes. I was skiing in padded pants. Not cool at all. I went and bought a snowboard and started riding, but I obviously had to dress the part as well, so I started calling Týndi Hlekkurinn on a regular basis to order clothes from them. I got to know all the people there, like Rúnar, Heiða, Jói and Jón Teitur. There was no store like it in Akureyri. My friend Jóhann and I decided to open a board store in Akureyri. Then I met Móði on the hill and the three of us were gonna open Holan. Then Jóhann dropped out of it, so Móði and I opened Holan just the two of us. 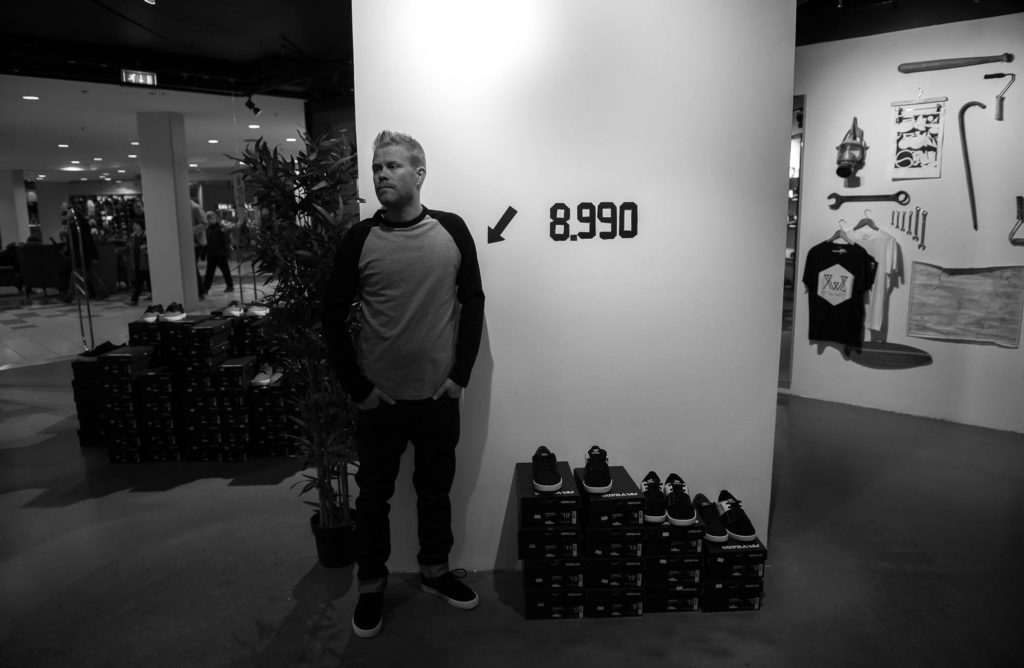 Was there  no problem opening a store at the age of twenty one?

Not really. We just used left over wood to build the interior, did it very cheaply. We didn’t have a dime to our name, but we managed to succesfully pitch the idea to the Akureyri branch of Búnaðarbankinn (a now defunct bank). Initially we bought all the merchandise through Týndi Hlekkurinn, but then we started importing various brands, like Elwood. This was something new in Akureyri and we weren’t especially well liked in the community. Everybody thought were real idiots, even though we’re all very nice guys. This one time a kid on a skateboard broke a window at the local drugstore, and it’s owner came and tried to have us settle the bill, just because we sold skateboards. Ridiculous.

How long did Holan survive?

I moved south in 1998 and spent a year in Reykjavík working at Týndi Hlekkurinn. In the mean time Móði ran Holan up north. I moved back up north, but we sold Holan in the year 2000.

There has been a lot of change in the industry, right?

Yeah. We claim a pretty big share in the board scene in Akureyri, and there weren’t many people snowboarding up north when I started. We sold Burton and other brands, and it caused a bit of a revolution in the town. People would verbally accost you on the hill and give you the evil eye, but there has been a total reversion today. Iceland has three professional snowboarders and they all hail from Akureyri. 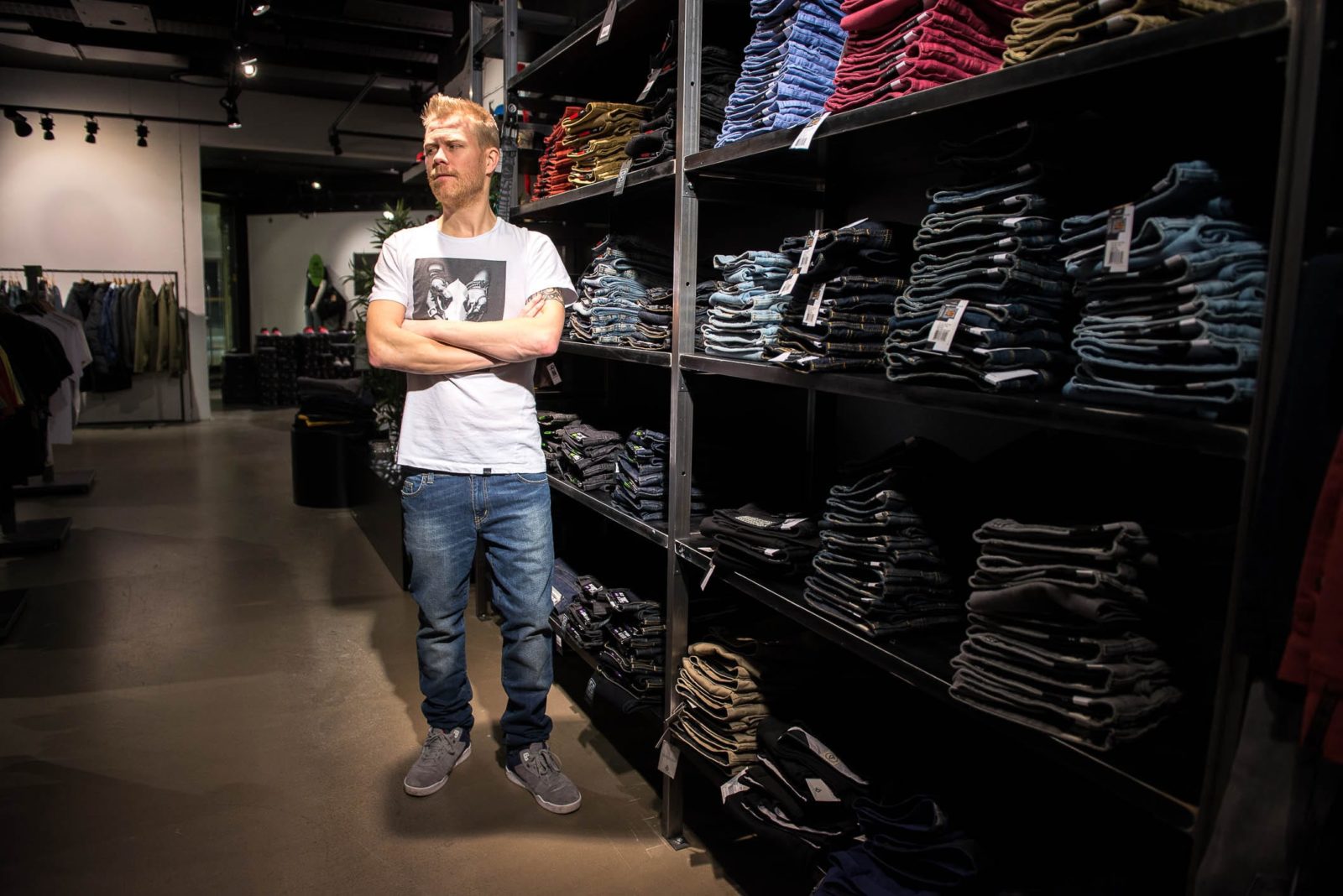 Do you have any good stories from the Holan era?

Well, yeah, This was naturally a totally unforgettable time. The people from Hlekkurinn would come  up north and just crash at the store. If  we got a bluebird powder day, we´d leave a sign in the store window which said we were having a weather closure, and head to the hill. But yeah, there are a lot of stories, which we´ll save for later, hahaha!

What was in store for you after Holan?

I move back to Reykjavík and start working at Týndi Hlekkurinn again, but then Rúnar and Heipa sold Hlekkurinn and shortly after Hlekkurinn closed it’s doors for good. I started working at Nanooq, which then became Útilíf, where I was in charge of the board section. Then I was offered to run the store Smash, which I accepted after a short period of consideration. I was there for five years. I got to know Kristján through NTC (the Smash mother company). During this time I often went to San Diego for trade shows and whatnot, and I wanted to bring someone along, and I always ended up choosing Kristján, which was a lot of fun. We´d cruise around in convertibles and stuff like that. We had planned to purchase Smash, but it didn’t work out. So we  started planning to open a store together, which became Noland. We first opened in Laugarvegur in 2007, but quickly relocated to Kringlan (a Reykjavik shopping mall) and have been there ever since, although we recently opened a branch in Laugavegur again. 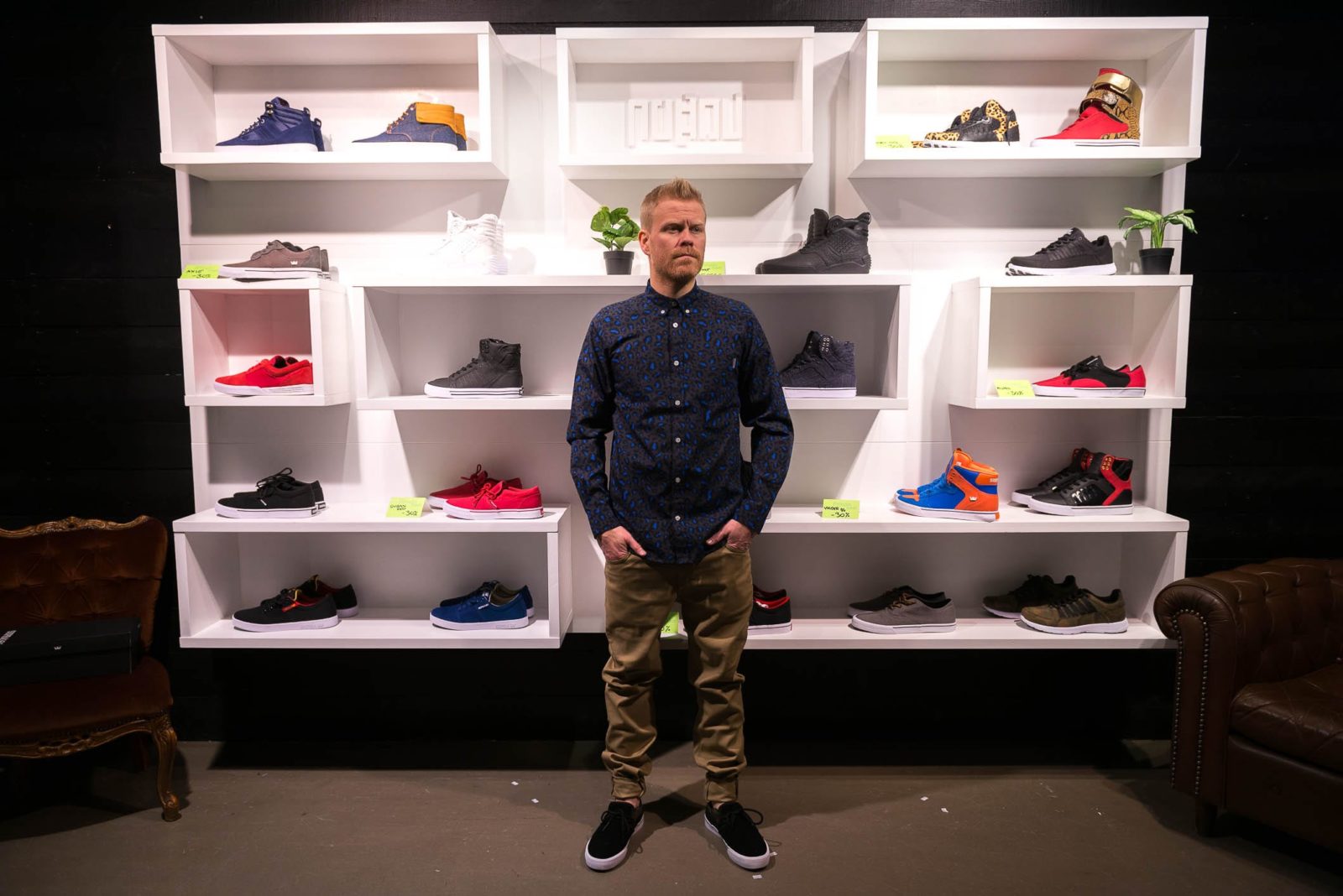 What’s it like attending those trade shows abroad? Is it all work and no play?

Not really. More like a constant party. But it comes with a lot of responsibility. You’re purchasing for the store, so you’re not just doiing whatever. You also get to know a lot of people from all over the world that are just like us that skate, surf or ride and enjoy wearing cool sneakers. Its also your hobby, although a hobby you’re lucky enough to be able to make a living at. My favorite shows are in Berlin and San Diego, where Mexico is a twenty minute cab ride away. It can get a bit scary, but I have been there twice. Not such a great idea though. Once, while in Berlin, I had to meet with some guy named Jason the following day. That night I was at some club and someone points Jason out to me, and I walk up to him and tell him we’ve a meeting the following day, which ends up with us partying bare chested at some random location. The next day Stjáni and I go to the meeting with him.  After, like, a quarter of an hour I realize this isn’t even the same Jason. Which is pretty funny. 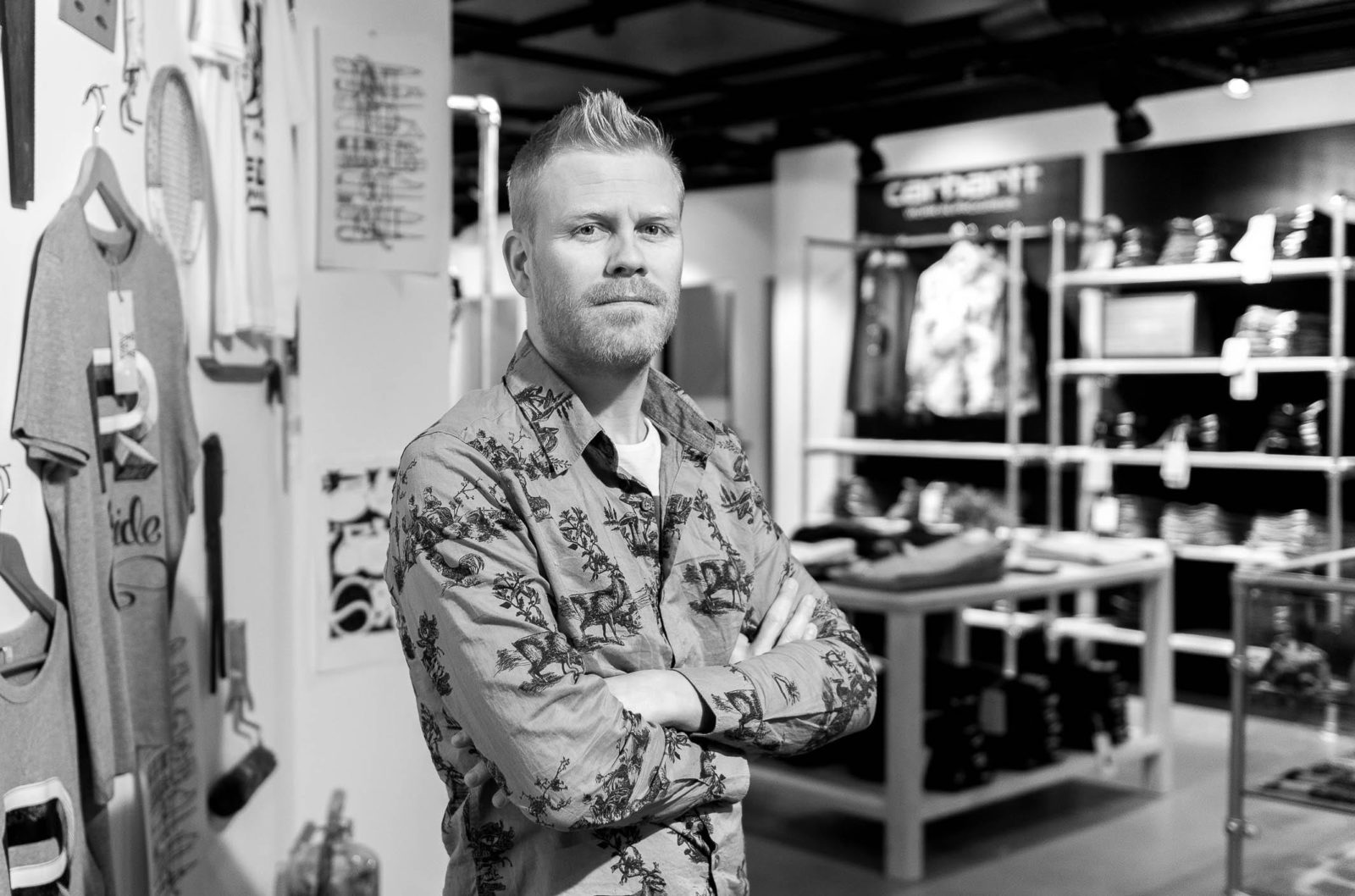 What is your opinion on the availability of skateboarding spots in Iceland?

There is an obvious need for a good, indoor, skatepark. People often feel that skateboarders get in the way, but I think that’s just because they have nowhere else to go. The Loftkastalinn skate park has been shut down and one of the Laugardalur parks has even been carpeted, and they had some golf architect design the new Laugardalur park which is obviously not good, just really bizare. Then they buy all these Rhino ramps and just toss them wherever, often where the blacktop is bad. Why not stop buying all these Rhino ramps and build a good and large skatepark instead. There’s just no thought put into it. Rune Glifberg came here about a year ago and he’s putting up a lot of parks in Denmark. He met with a government representative and explained to him that there isa great need for this in this country, and not just for the skaters, but for everybody. Parents that have kids that want to skate would probably like to know their kids are in a safe environment.

What would you be doing if you had not developed your boarding interest and opened these stores?

I was heavily into horses and hockey, and I did some electrical engineering courses at school. Shit, i dunno, maybe I´d be an electrician our a horse tamer or a hockey star in Canada. The first time I dropped in on a ramp I broke my ankle. An open fracture. There goes my hockey career. I´ll never forget one moment, which is  when I first went to San Diego in 1998. Rúnar Ómarsson at Nikita, and I, were driving by the beach and a kid with a surf board runs out in the street and we almost run him over. We hit the breaks and I look over to see this really old man with long white hair and a long white beard carrying his longboard. He was going surfing with his grandchild. Something happened to me then and I told myself; “I´m gonna be that guy.” 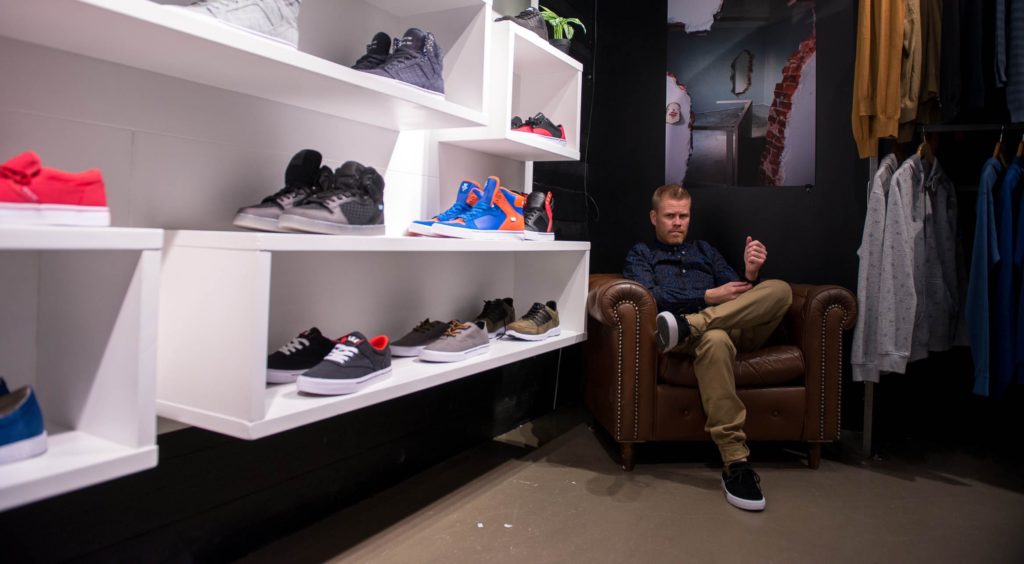 Where do you see yourself in twenty years?

I´ll definitely be somewhere skating or surfing with my grandkid.